Well, nothing to quip about this time really, so..... 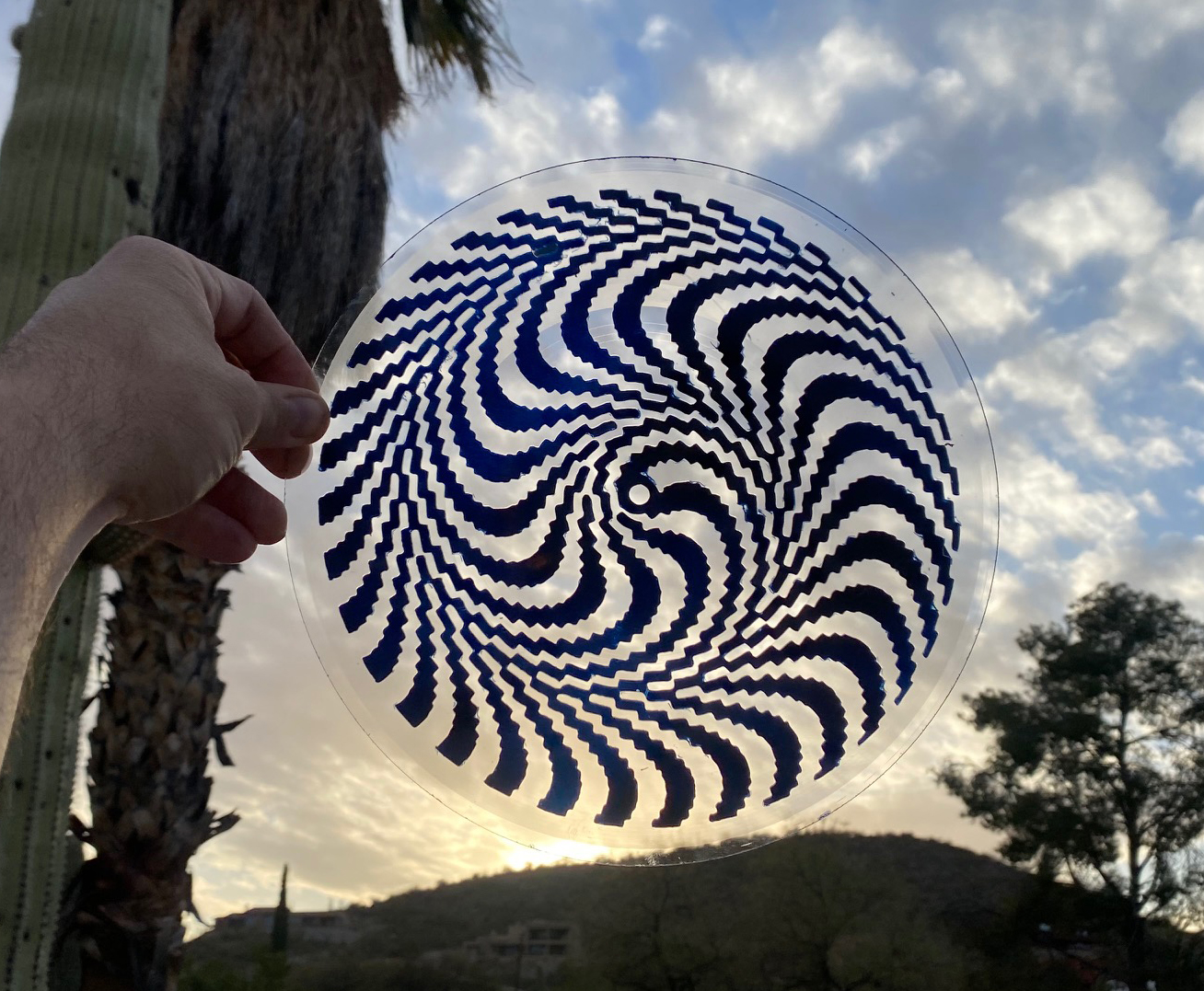 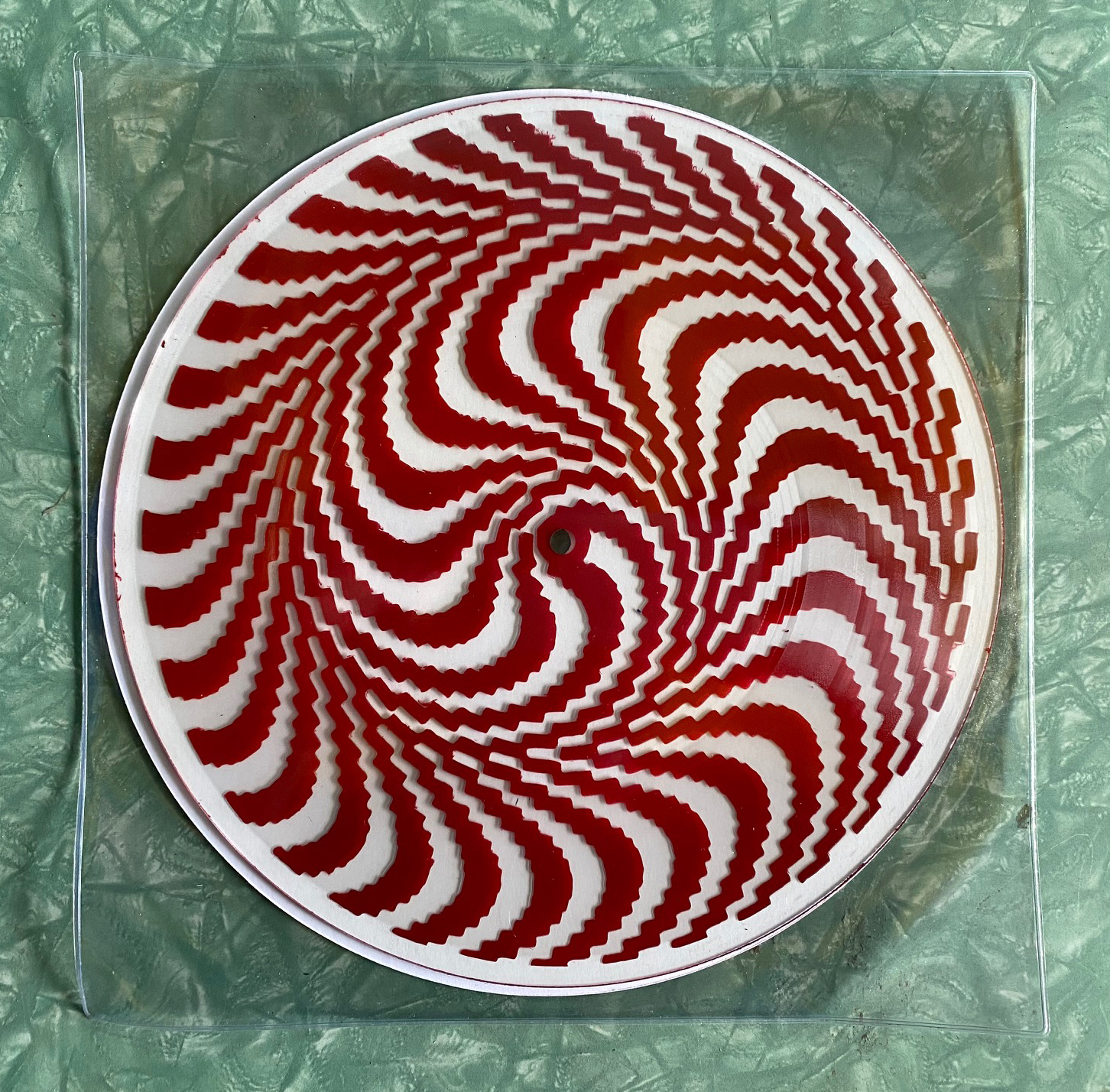 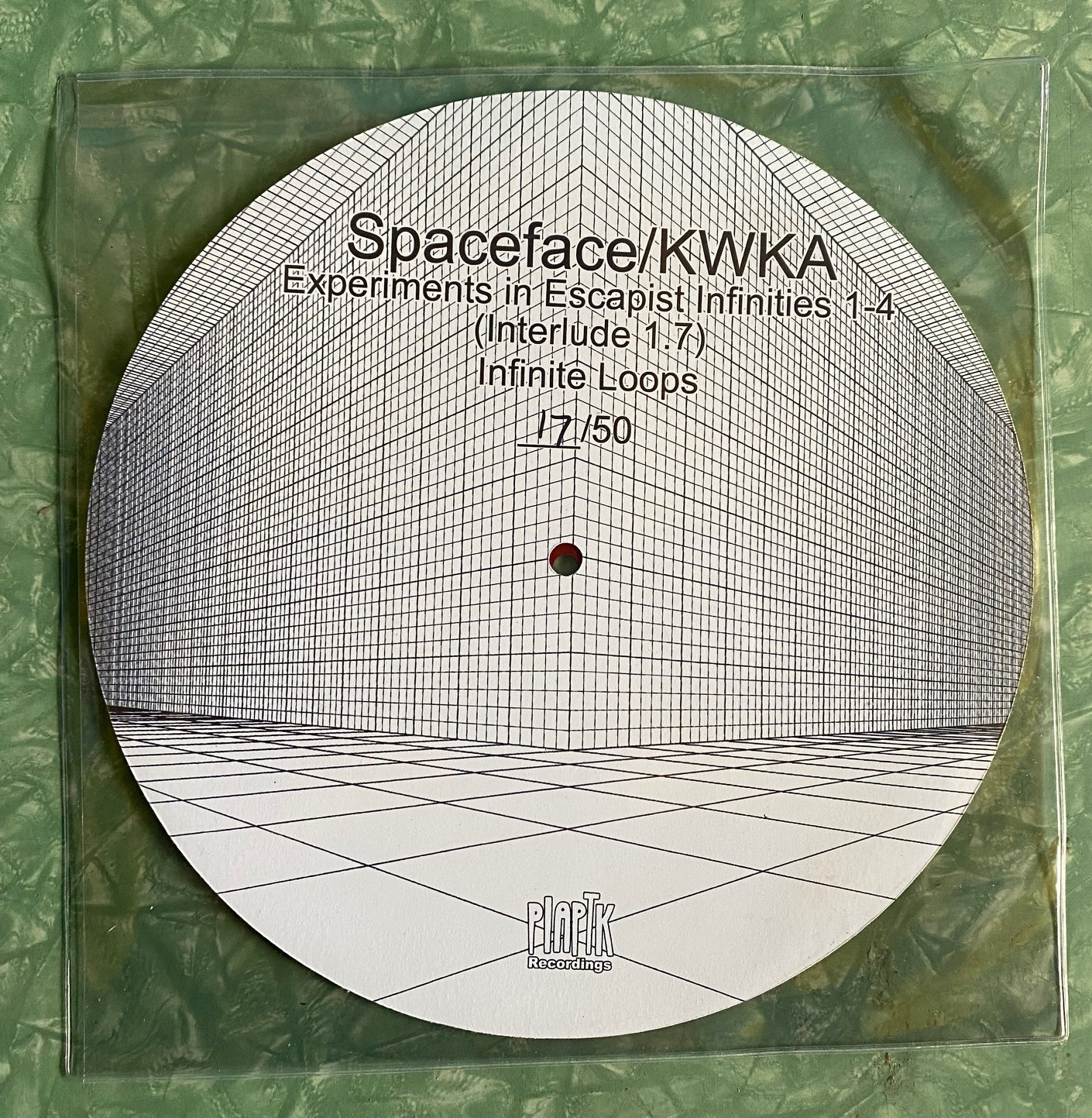 Long form Instrumental collaboration between Spaceface and KWKA (Mike Fridmann) also includes 3 unique hidden locked grooves. On a 10"optical art picture disc with 10" round platter mat insert to put under the record while playing it to make the optical effect really pop (best when viewed through your phone). Each pic disc was made using my cricut cutter and was a major pain in the ass. But I do it for you. Also, my daughter Ryer, helped.
There are three variants: Red and Blue are limited to 25 copies each, and the "Chaos Theory Edition" were fuckups that I thought looked cool regardless. They don't do the optical art effect, but they are unique in their own way. "PIAPTK: Shrugging and saying "It's Not A Fuck Up It's a Feature" since 2006".

WHILE YOU ARE AT IT: Pickup some of the other Spaceface releases that are almost sold out.

BLURB FROM SPACEFACE
Working on making a record can be sort of a grueling process when you’re refining the sounds and whittling each song down to fit a mold. It’s important to be able to step away and just have a free flowing fun time makin stuff. Experiments in escapist infinities was exactly that. It mostly made in the winter of 2018, with Jake Ingalls coming up to Fredonia to work on Flaming Lips music between working on Spaceface’s upcoming record and Mike Fridmann (who was assistant engineering the Lips’ records) on off days and inbetween sessions working on the last 2 Flaming Lips releases in Fredonia, NY @ Tarbox Studios.
Each of the two would set up their computers with whatever gear they brought and whatever synths they could get their hands on at Tarbox then record a bunch of material.
The goal was originally to make a collection of loops that could go on playable postcards but eventually Mike sewed together each loop with different soundscapes based on noises and parts we’d played inbetween and created this 8 minute song. We weren’t sure what to do with it until PIAPTK had these wonderful op art lathes they approached us with.
Now these bits have a nice home on a beautiful piece of playable art.
So: I think it worked! We both had a ton of fun making this and now everyone can hear it.
Finally tally of gear ended up being:
An iPad Mellotron app, a fender Rhodes, an OP-1, 1 silver tone guitar, a poly6 and a CS-80. Fun! 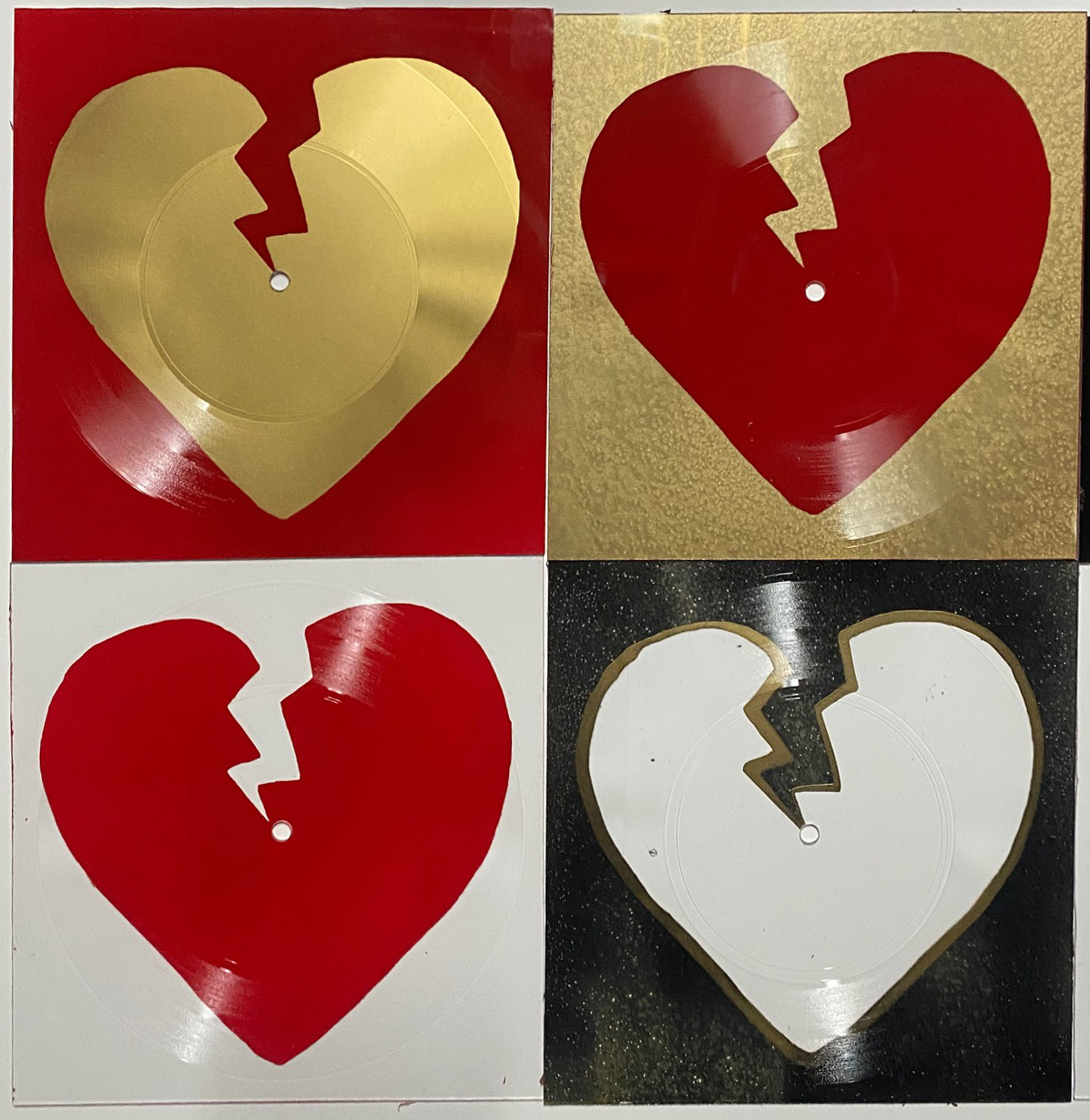 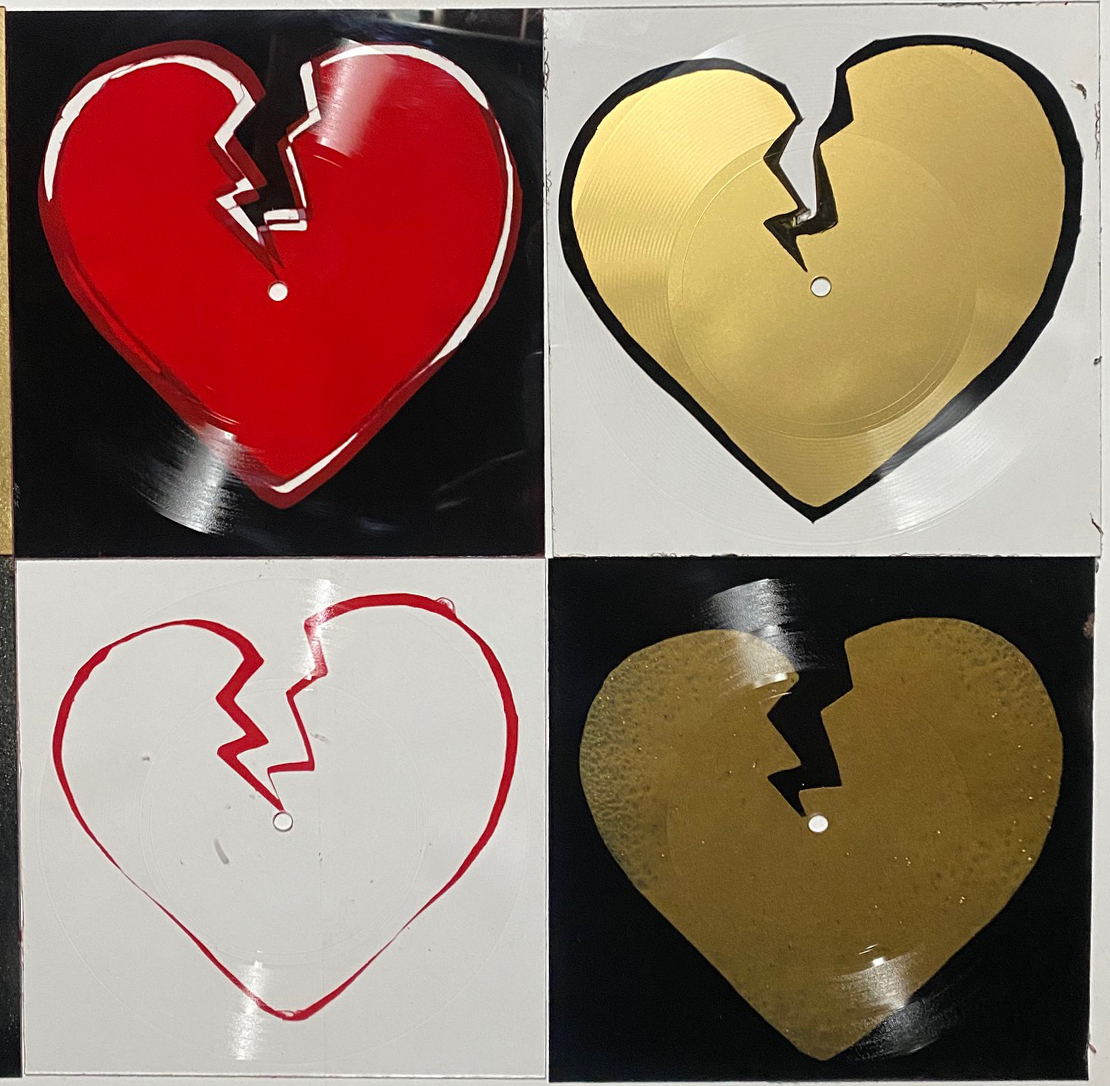 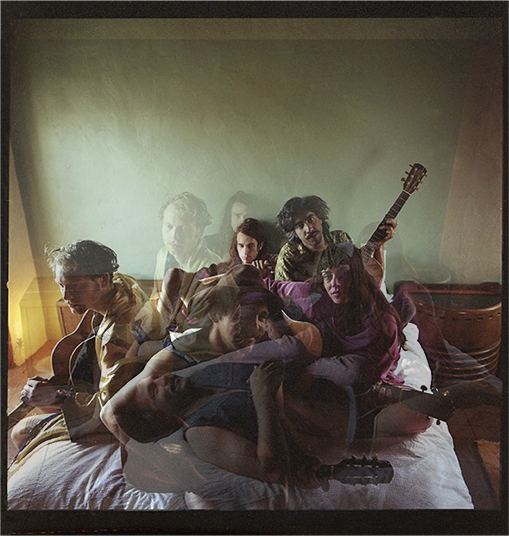 Truck Tears was a project put together by Paul Cossette (Sturgill Simpsons' Grammy Nominated Engineer who just moved back to Tucson to open a studio) and Joel Crocco (Tucson/Paris wild man from a ton of bands around here and there) with the modest goal of playing and recording a couple of sad bastard old country tunes (one made famous by Ray Price and the other by Hank Williams, Sr) with friends (Including Nate Mahan of Shannon and the Clams) in true Nashville Sound style to be released on 8" pic discs on Valentines Day. #MissionAccomplished. The results are great. Check them out and/or download them for free at: https://trucktears.bandcamp.com

Limited Edition of 60 unique 8" Square pic discs, We all got together with my cricut cutter, some beers, and some spray paint and experimented with color schemes and patterns, making each one it's own work of art.

I live for the road. Even during the pandemic I managed to drive over 30,000 road miles last year. And I love podcasts. Here are a few of my faves: (PS please send me your faves, too)

THE TOTH ZONE - Incredible Memoir Audiobook in the form of a podcast from one of the best songwriters/storytellers to ever live, James Jackson Toth (Aka Wooden Wand). Season One is memoir of his growing up as a music obsessive in Staton Island, and Season Two so far has focused on some pretty insane tour stories.
BRADFORD TROJAN AND FRIENDS: Bradford is a Tucson staple (but a Philly transplant like half of the Tucson music scene) and has been in bands/friends/collaborating with tons of PIAPTK folks... Golden Boots, Dr Dog, Andrew Collberg. An insanely entertaining showman, storyteller, actor, puppeteer, etc and his podcast follows suit. So far he has done interviews with musicians, astronomers, musicians, etc like The Teeth, Scott McMicken, Racoon. And coming up in the next month or two will be an interview with Doug O'Donnell (prev of Dr Dog) about the Legacy of Sloppy Joe Flappens (PLEASE check out Keep on Cruisin' if you haven't already) and even yours truly.
Highway Hifi - These guys are great... their podcast covers all kinds of weird and kooky niches of music... Trucker Country, Music of Cults, Tolkien's influence on Music, Women in Electronic Music, and assorted musical legends and lies. Pretty much whatever interests them, and it is incredible how often their interests align with mine.
Wind of Change - If you like Buttrock, Russia, The Cold War, CIA Culture Wars, Spies, Drug Dealers, and international intrigue and Espionage, this is the podcast for you.

Low Profile With Markly Morrison - You may know Markly Morrison from PIAPTK artists like Skrill Meadow, Lazer Zeppelin, and LAKE. He digs deep into the weird, fringe, music world and brings out some incredible stories. 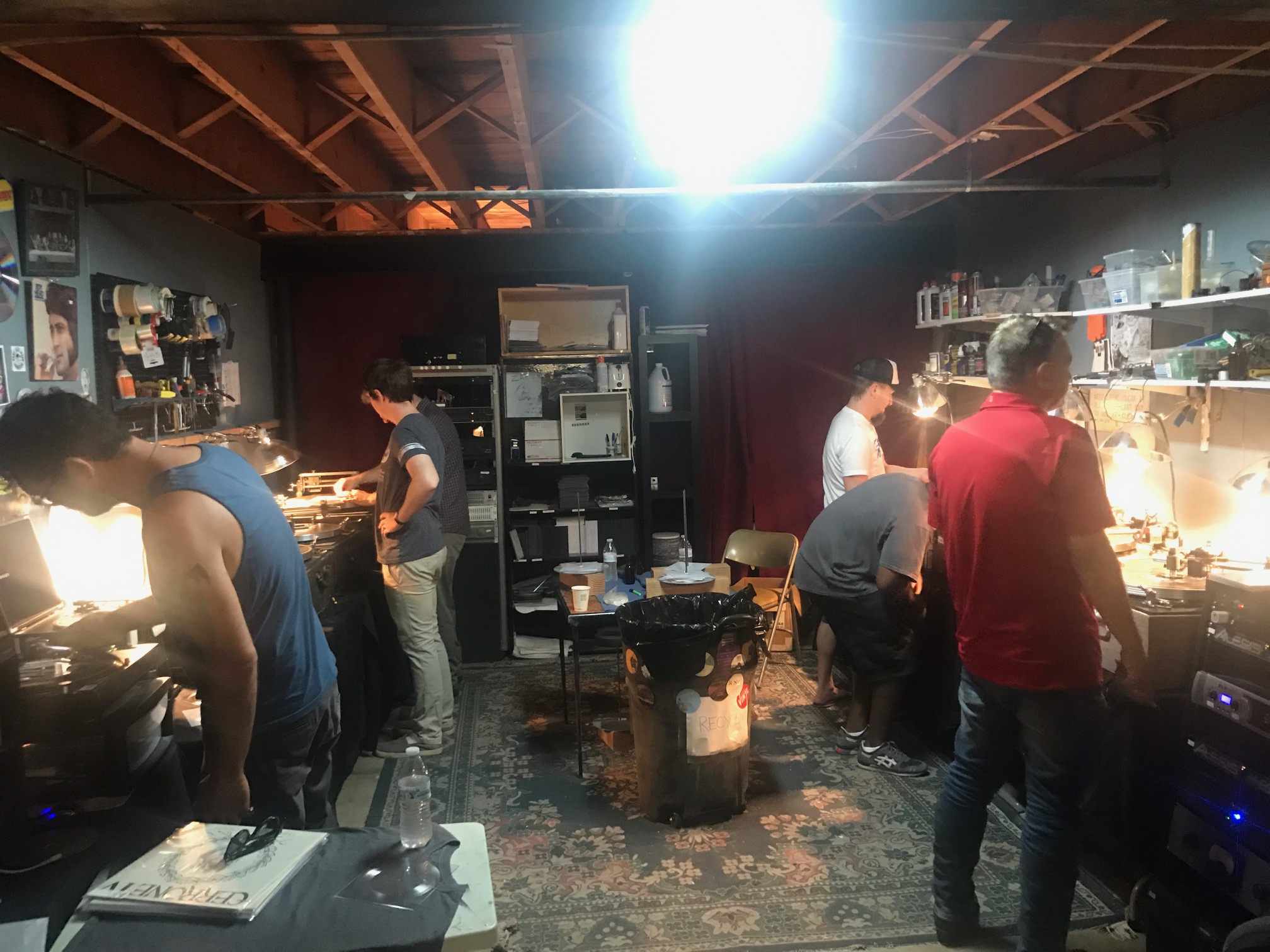 Late Summer Lathe Cut Camp?
I've been getting a TON of requests for a Lathe Cut Camp recently as everybody is getting vaccinated and dying to GTFO of town. So, if you are interested in coming down to Tucson during Monsoon Season, and spending three days learning how to cut records, please email me and let me know. I've also got a few lathes available if you are interested in cutting your own records at home!