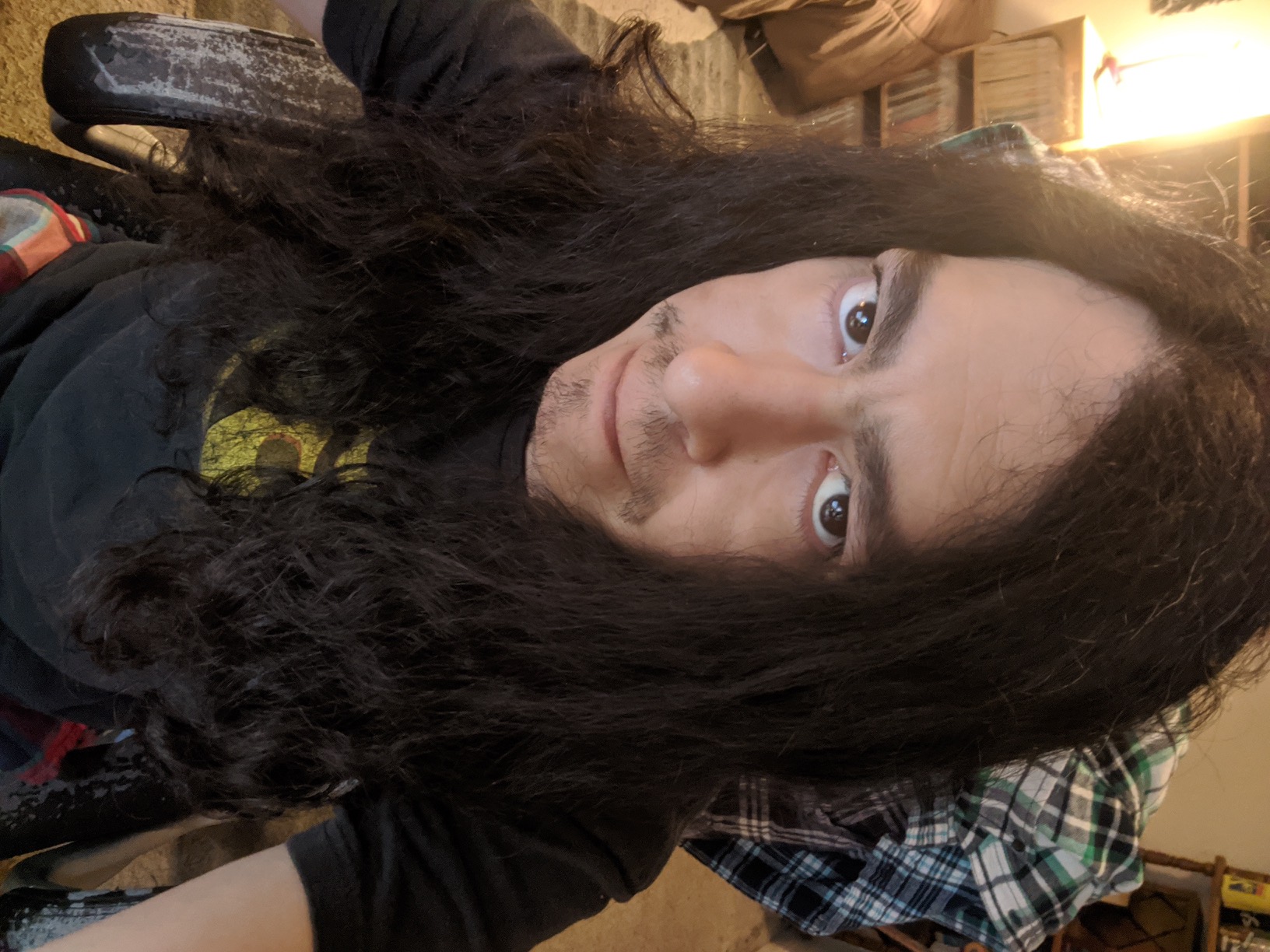 Hello again! Welcome to the Richard Santos issue of the PIAPTK newsletter. For those (most of you) who don't know him, Richard Santos is one of my favorite people. An ageless Austinite whose main passions include heavy metal, psych-pop, and yacht rock billboard chart-toppers from 1972. He is one of the most excited/excitable dudes I've ever met in my life. And he loves great music. He films videos, makes tons of collages, roadies for bands, etc. He is just an all-around good-vibes-man. And it just so happens, he randomly had a hand in ALL THREE of the releases that are coming out today. He made the collages for the Scott McMicken “Catch Ya Later” Pic Disc AND the video (along with Jeremy Bruch), He made the collage for the Golden Boots “Nite Drives” Soild Gold Poster, AND, after I sent him a Sloppy Joe and the Cruise test pressing in a big care package last month, (with no real info, but knowing it would appeal to his obsession with 70s yacht rock) he sent me a LONG letter asking tons of questions about it, and an (unsolicited) hand-written recipe for his Sloppy Joes and a $20 bill to buy the ingredients so I could cook them up myself. I did, and they were delicious, so we included the recipe in the zine that comes with the Keep on Cruisin' album.

PLEASE NOTE: ALL OF THESE ARE PREORDERS. They should hopefully ship soon. They are all en-route to me via UPS, and I will ship them AS SOON AS HUMANLY POSSIBLY, but as I learned from the Floating Action Outsider Art LPs, UPS is having some issues these days. Also, the photos are either incomplete or mock-ups... that will be corrected once I get everything in from UPS (this week, HOPEFULLY). It will take about a week for everything to arrive, and a week to get everything assembled and mailed. So, HOPEFULLY two weeks? 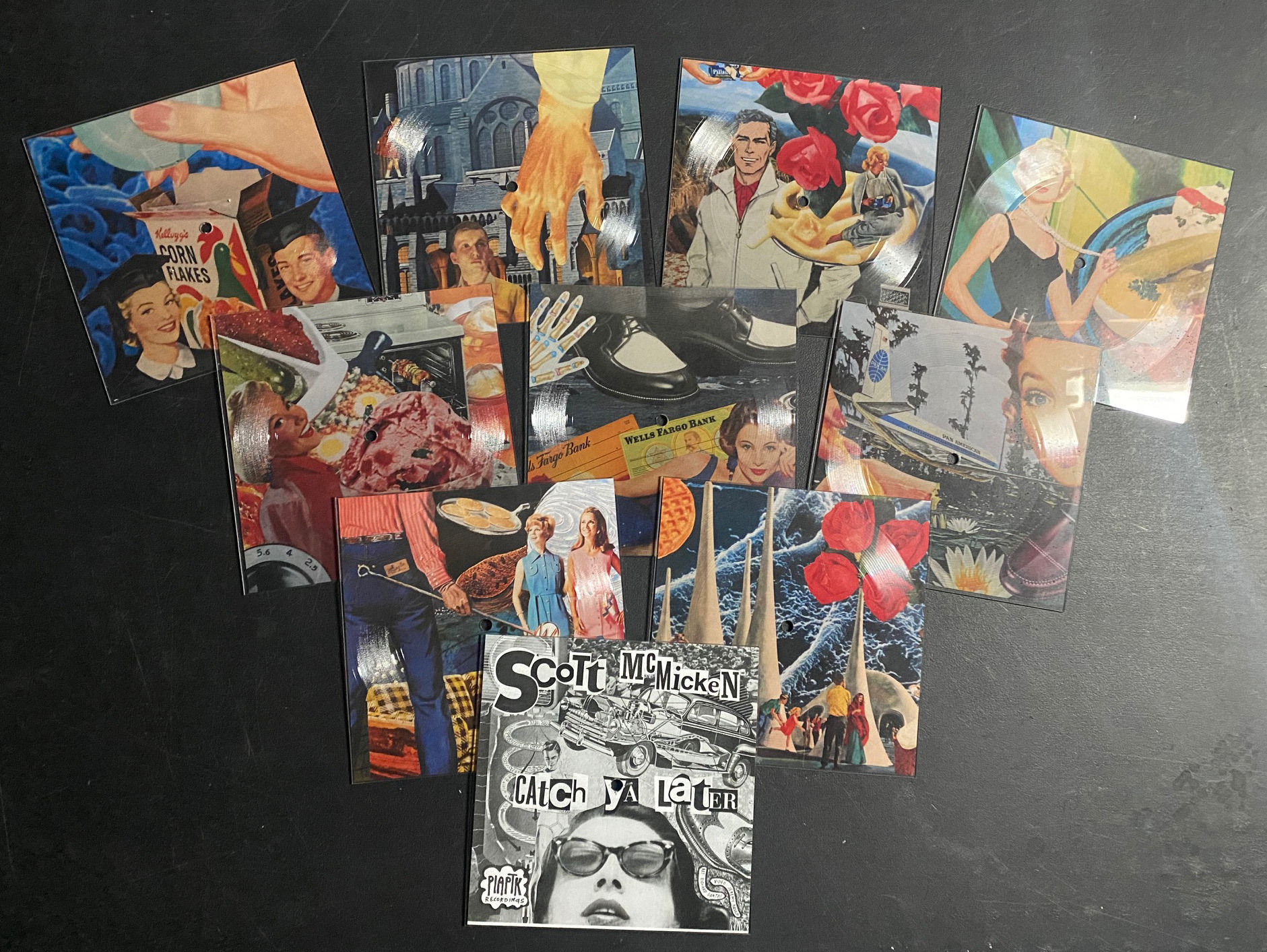 Scott McMicken – Catch Ya Later Lathe Cut Pic Discs
Scott McMicken and Richard Santos (who toured with and filmed the Dr Dog “Bowery Ballroom” Live Video and released it under his DIY film label, Shot By A Fan) collaborated with former What Made Milwaukee Famous drummer, Jeremy Bruch to make a video called “Catch Ya Later” that featured a new Scott song, Richards' collages featuring otherworldly Leave it To Beaver era scenes of twisted domesticity, and his and Jeremys' greenscreen sock puppet work. Check the video here: https://vimeo.com/410043553

Never one to let a Scott McMicken project pass me by without asking to be a part of it, I asked Scott if we could do some pic discs of it using Richards' collages, and he said “As long as Richard is down, so am I!” and I knew Richard would be into it, so we got cranking on them. Richard emailed me 100 unique collages, so there are ONE HUNDRED different designs of this pic discs. Like all recent releases, these are not limited during this weird time. Everybody that wants one should be able to get one. I won't make them forever, but for the foreseeable future, I'm not limiting the editions. But, you can rest assured that you will own of one only a few of the version of the disc you get. 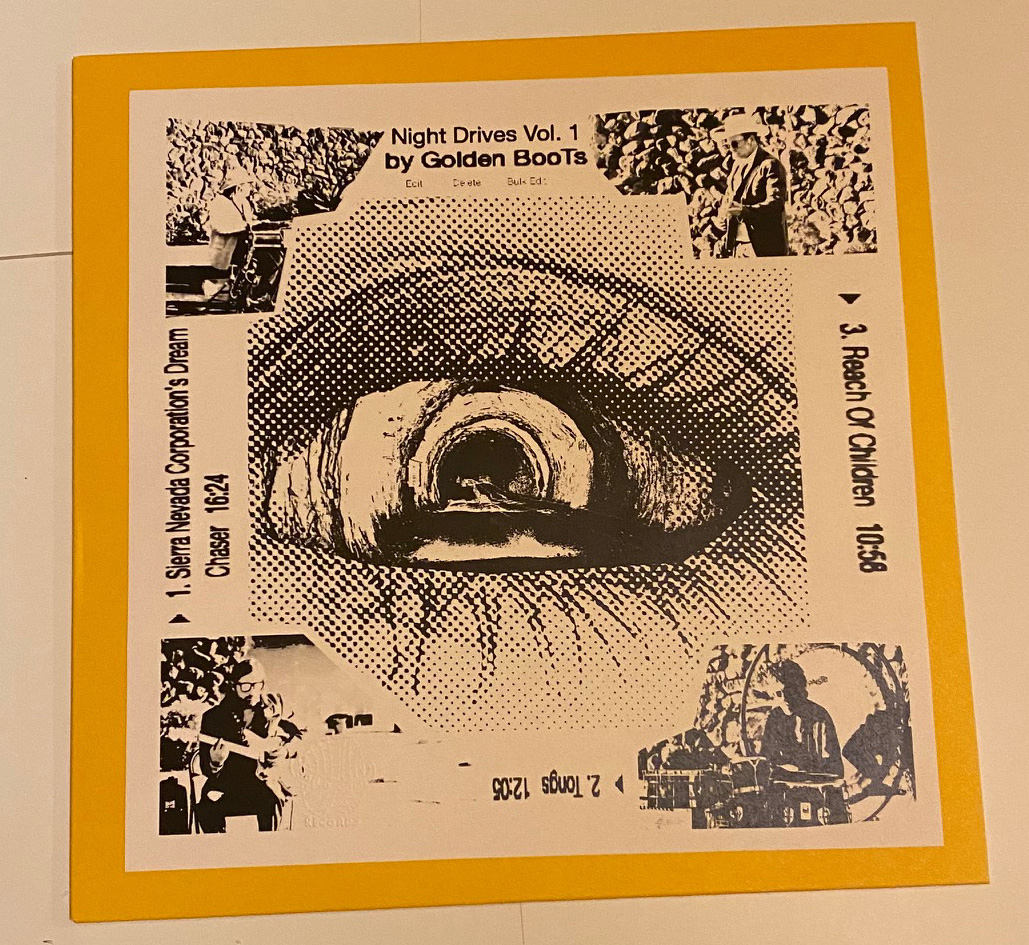 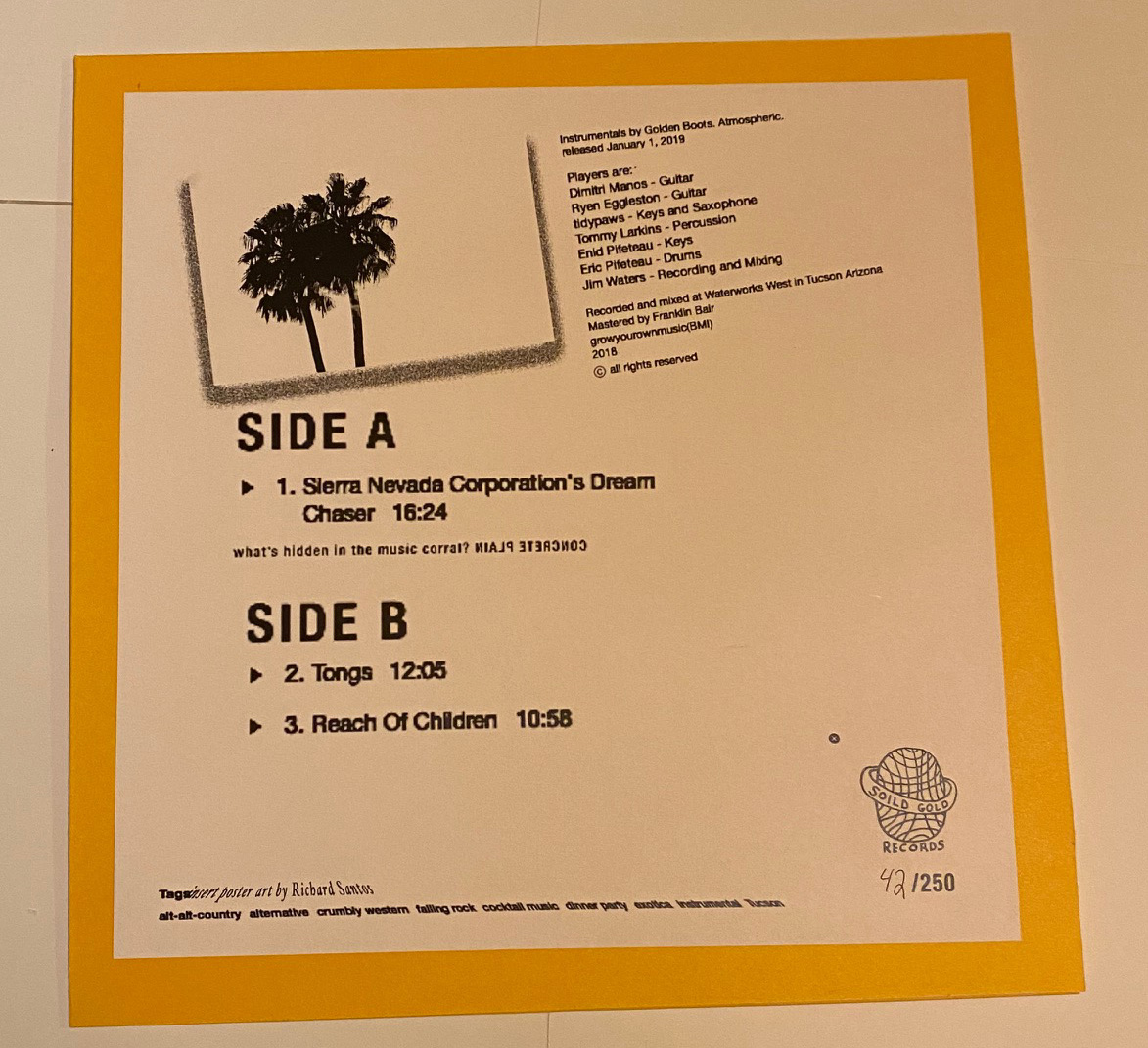 Golden Boots – Nite Drives Soild Gold LP
Golden Boots have been stretching out over the last few years. As the lineup has fluidly shifted around Ryen and Dimitri, the format has gone from Crumbly Western to Omnichord-Core to Instrumental Sunset tunes and everything in between. And they have been PROOLIFFFIC. Nite Drives was recorded a couple years ago during the beginning of the Instrumental period, and it has been a fan favorite since being released on tape by the band. And, since I've recently been getting more into instrumental albums myself it made perfect sense that the man who founded Soild Gold (Dimitri) would be the 12th Soild Gold release. It consists of three long format chill vibe background dinner party tunes. 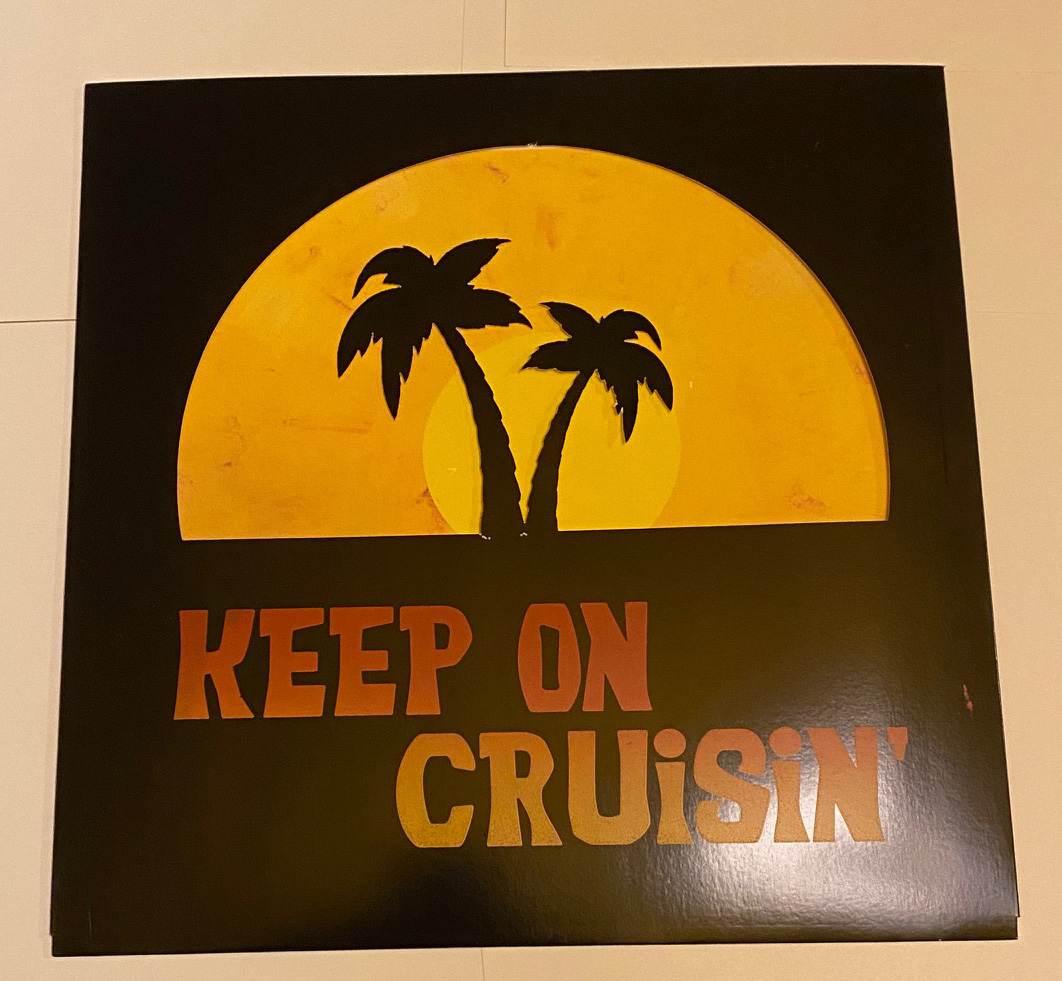 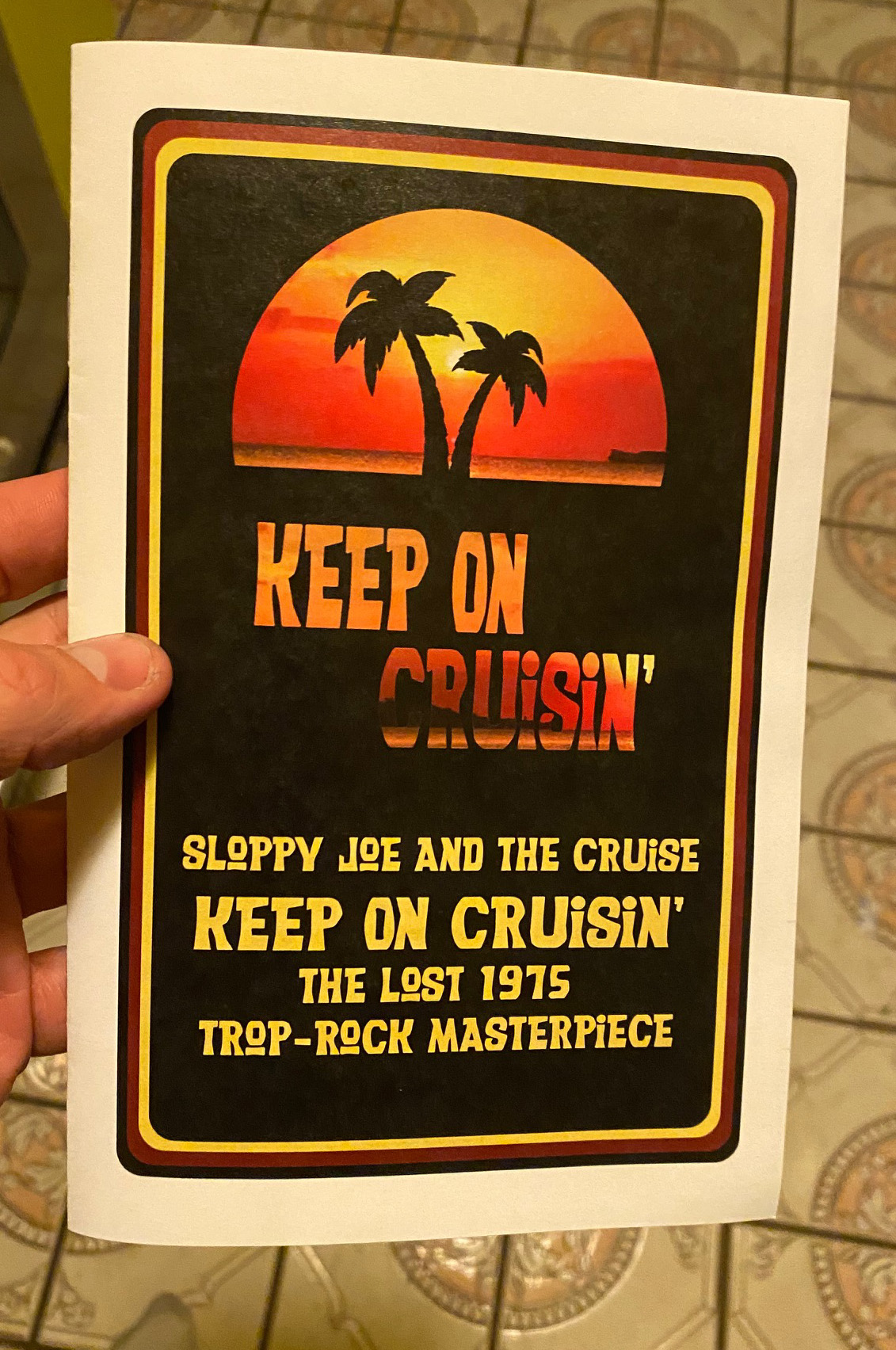 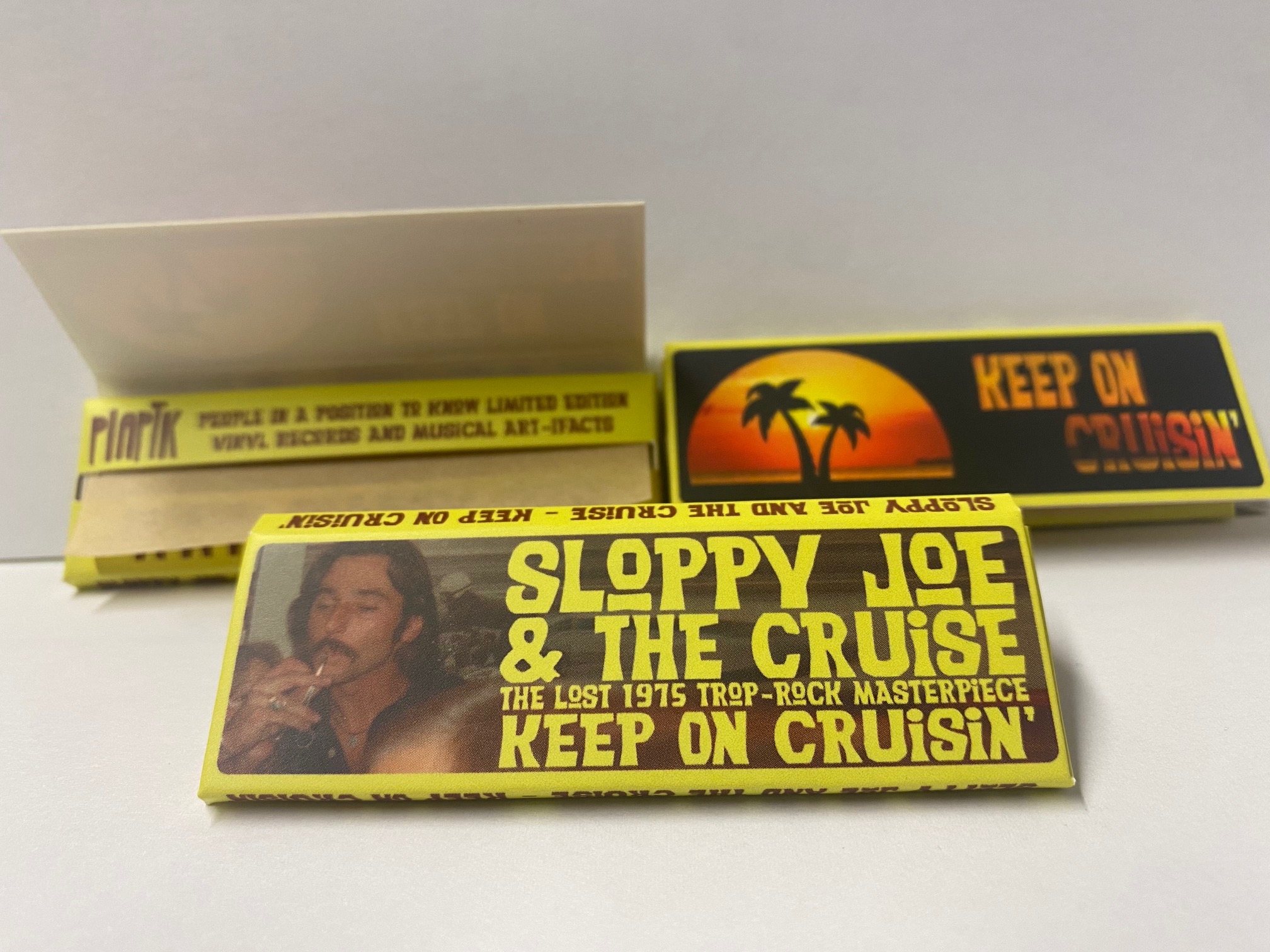 Sloppy Joe and the Cruise – Keep On Cruisin' LP

I REALLY love this record. And the response to the soft-rollout of it has been incredible. It is available NOW to stream at all the usual streaming sites.

It was recorded in 1975 by a Key West slacker named “Sloppy” Joe Flappens, and sat on a shelf until a year and a half ago, when he passed away and it was sent to Doug O'Donnell (former Dr. Dog guitarist) as a condition of Joe's will. Joe and Doug met in 2004 at a bar after Doug played in Key West, and they became penpals. Below is the teaser. The full story is in the zine that is included with the record. bookshelf at Joe's house for 40 years. See the teaser story below....

The Keep On Cruisin' Pack Includes:

-First Pressing Limited to 250 copies in die-cut covers.
-On Yellow with red fleck sunset vinyl.
- Includes a zine with images and what little information is known about “Sloppy Joe” Flappens and the recording session
- Includes a pack of custom Keep on Cruisin' rolling papers

THE STORY:
After a show in Key West, FL, in 2004, Dr. Dog guitarist Doug O'Donnell wandered into a run down dive bar called Chart Room, and ordered a drink. There we only a handful of lonely regulars in the bar, but one of them came over and sat down next to Doug after hearing that he was a touring musician. For the next two hours, this skinny, scraggly bearded man, although in his mid-50s had the world weariness of someone far older, unrolled his own incredible history (while Doug unrolled the $5 bills of his tour per diem to keep them both in rum and cokes). This man was “Sloppy” Joe Flappen. In the late 70's, (as he told it), Sloppy Joe was one of the kings of the Southern Florida Beach Bar scene. He had a band, “The Cruise”, that would pack houses all the area, long before Jimmy Buffet's “Margaritaville” would bring Tropical Rock to the masses. Buffett and Flappen were working the same circuit, and, while not exactly friends (there was, unshockingly, a “woman to blame” for this), they occasionally played together. Joe gave him a copy of the record that night (dubbed over a Dan Fogelberg cassette), which became a favorite in the Dr Dog tour van. Joe and Doug continued to be penpals for the next decade, but eventually lost touch. When Joe passed away in 2018, he left the master tapes to Keep on Cruisin' to Doug, along with a note asking him to get it out to anyone who might care. So that is what we are trying to do.